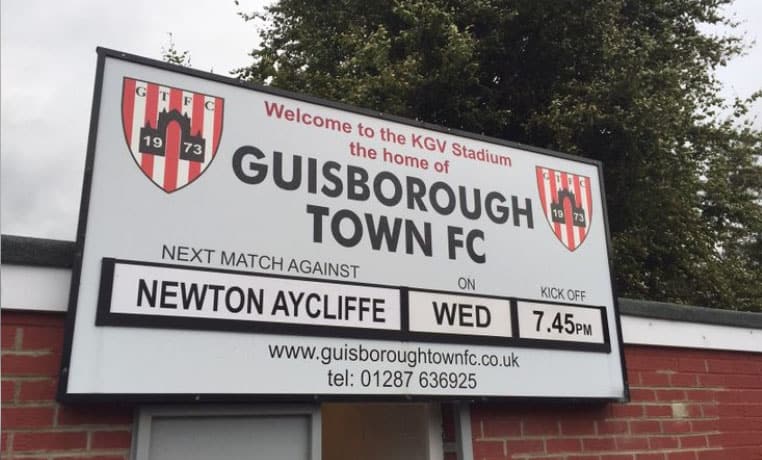 Newton Aycliffe were knocked out of the Emirates FA Cup last week after a disappointing night at the King George V Ground.

Nathan Guru scored the only goal of the game eight minutes from time last Wednesday night as both sides missed penalties on an awful evening in North Yorkshire with wind and heavy rain persistent throughout.

Arran Wearmouth saw his 94th minute penalty saved by debuting goalkeeper Aaron Steavens after Mark Robinson had blasted his penalty over the bar earlier in the game.

It was a night of frustration for Aycliffe who were eliminated at the first hurdle for the second successive season.

Aaron Brown captained the side which saw Nick Green come through a late fitness test to start in defence as Wearmouth was given his competitive debut for the Newtonians leading the line alongside Adam Burnicle and Liam Jarvie.

Head Coach Colin Stromsoy will have been disappointed with his side’s sluggish start as Guisborough began the game in much brighter fashion with Joe Ferguson forcing Adam Pickford into a smart stop down to his left in the early stages.

Six minutes later and the home side were in down the right but Mason McNeill’s audacious chip went over both Pickford and the bar.

Pickford was called into action again in the 22nd minute when Sonni Coleman found space in the area but once more he got down to make a good stop as Aycliffe continued to weather the storm both on and off the pitch with conditions worsening.

Mid-way through the first half and Aycliffe finally began to see some possession which almost resulted in a goal when Wearmouth won the ball back in a dangerous area but his cross was somehow kept out as Jarvie was unable to scramble it home.

McNeill was shown a yellow card for a robust challenge on Marc Costello before Lewis Walton levelled the card count up as the tackles began to fly in during what was becoming a competitive cup tie.

Ferguson curled a left footed freekick just wide of Pickford’s post before Walton himself saw his in-swinging set piece almost creep in at the back post having somehow evaded everyone in the penalty area.

Green was on hand to make a superb last ditch tackle from 12 yards after Aiden McGee’s untimely slip presented Guisborough with an opening as the teams went in level.

The rain continued to pour down in the second half but Aycliffe emerged a much better team and Burnicle might have opened the scoring inside just two minutes of the half after an excellent cross from Costello.

The striker had time and space in the box but Steavens stood firm to force his effort out for a corner.

Aycliffe continued to press without creating anything more clear cut and were relieved in the 55th minute when Josh Rowbotham stabbed his effort wide from close range after another untidy scramble in the penalty area.

Wearmouth looked to have given the visitors the lead after the hour mark when he met Ethan Wood’s freekick but the excellent Steavens clawed away his header at full stretch.

With 15 minutes to go the Priorymen were given the opportunity to take the lead after referee Jamie Cann adjudged McGee to have brought down Steven Roberts.

Robinson took the spot kick but blasted high over the bar to give Aycliffe a reprieve.

But as the tie looked like it might be heading the distance, Ferguson’s centre was met by Guru who forced the ball over the line at the second attempt with referee Cann uninterested in the protests made by Pickford who thought he was impeded.

Stromsoy’s men threw everybody forward for the remaining five minutes and substitute Andrei Ardelean was denied by a goal line clearance by Rowbotham in stoppage time before then being brought down in the 94th minute.

Wearmouth stepped up but his penalty was saved by Steavens to sum up a wet and miserable night for Aycliffe as they were eliminated from the competition.