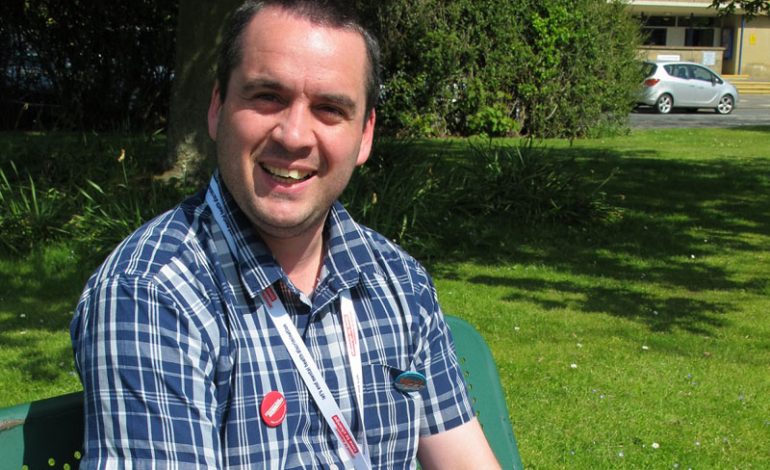 “If somebody gives me work to do that I’ve done 100 times, I struggle with being able to do it because my mind tells us I’m not good enough to do it, or that I’m going to make a mistake, or I’m going to do it wrong.”

These words offer a glimpse inside the mind of a man who suffers from anxiety and depression, who has chosen to speak out this Mental Health Awareness Week (MHAW.)

MHAW runs nationally from 13 to 19 May and is organised by the Mental Health Foundation.

One in four people will experience a mental health problem this year and Durham County Council worker Michael Chapplow has recounted his experiences to let others suffering know they are not alone – and encourage them to seek help.

Telling his story, Michael, who works in business support for the council’s occupational therapy team, said: “I’ve always lacked confidence since I was a child. So, I’ve always struggled with it.

“And, as a result of that, in my adult life I now struggle a lot with anxiety and depression. I get depressed really easy, which makes me struggle with my concentration levels at work, which means I’m unable to do a lot of simple tasks.

“If somebody gives me work to do that I’ve done 100 times, I struggle with being able to do it because my mind tells us I’m not good enough to do it, or that I’m going to make a mistake, or I’m going to do it wrong.

“I get agitated and grumpy quite a bit, which means I take it out on people like my family, even though nobody has done anything wrong.”

Michael has received help in numerous forms. He has had counselling sessions with mental health charity Mind and was taught ‘mindfulness,’ which involves doing breathing exercises and meditation as a means of forgetting every day stresses.

He also values the support of colleagues who know him well enough to spot if he’s feeling down and take time out to ask if he’s okay.

“I think one of the biggest things all of us can do, is talk to others about our mental health, and if they give information back to you, it makes you realise that you’re not the only person struggling with this kind of issue and that can really help.”

Michael has a number of ways of taking his mind off his everyday stresses, including going for drives. Going to the gym also allows him to alleviate stress and tension while going for a walk gives him time to think and problem solve.

Michael takes medication for anxiety and is very keen to end the stigma around this.

“Sometimes, and me included, people feel worried about taking it, because people are going to ask questions. But, it’s no different than taking a paracetamol for your headaches, you’ve just got to take the medication and if people ask, just be open and honest and say what it is.”

Cllr Lucy Hovvels MBE, the council’s Cabinet member for adult and health services, said: “One in four people will experience a mental health problem this year so there will be many for whom Michael’s story will resonate.

“We hope it will help those who are struggling with anxiety or depression to know they are not alone and that there is support out there for them.

“Something as simple as talking to someone and opening up about how you feel can really help and professional counselling is available through charities like Mind.”

Earlier this year, County Durham was selected as one of eight new national hubs to receive funding to tackle mental health stigma.

The county was made a Time to Change funded hub, by the mental health campaign, with the aim of helping change the way people think and act about mental health problems.

Hub status was granted following an application by Investing in Children and the council, supported by local NHS bodies and voluntary and community sector organisations.

Improving residents’ mental health and wellbeing and preventing mental illness and suicide is a key priority for the council.