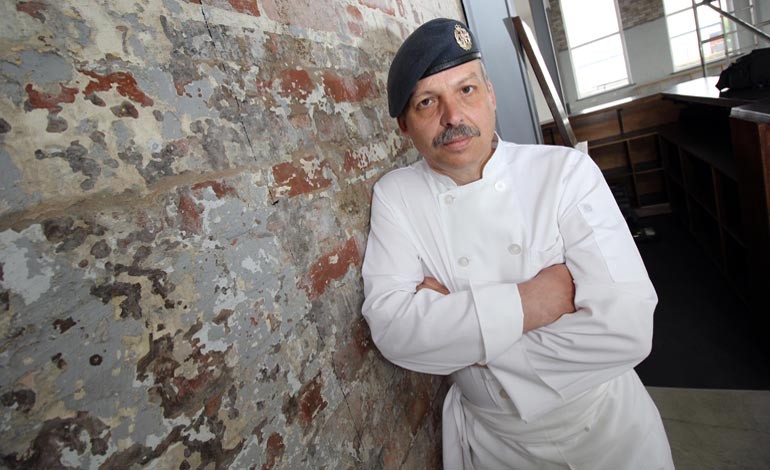 He isn’t your average chef.

Ironic, then, that the next stop on his career path would be at ROF 59 on Aycliffe Business Park – one of the former Royal Ordnance Factories which was purpose-built in the 1940s for the war effort.

He then spent 10 years in Cher, a central region of France, after buying and renovating a boutique hotel and making the most of his classical French cuisine qualifications.

Now the 51-year-old, originally from Cambridgeshire, has swapped the Continent for County Durham as he embarks on a culinary revolution at Aycliffe’s newest leisure facility.

Chris has taken on the role of head chef at ROF 59 after spotting the job opportunity on a recruitment website.

“I’ve always loved a challenge,” he says. “After my RAF days I bought a 10-bedroom boutique hotel and restaurant in Graçay – a little village in the Cher region of France – which hadn’t been touched for 100 years or more.

“I had to restore it. There was only one en-suite bedroom and by the time I sold it there was 10. Three miles of copper piping had to go into it and I made all the tables myself.

“I call it my big adventure, and it certainly was.”

Chris served across most of the country and all over the world with the RAF, including a stint at RAF Brampton, near Huntingdon in Cambridgeshire – formerly the home of RAF Support Command which now houses several elements of Defence Equipment & Support (DE&S).

“I have some wonderful memories of my time in the Forces,” he says.

“I once cooked for John Major, who was Prime Minister at the time, and on a separate occasion for Bill Clinton. It was quite amusing because we practiced cooking various dishes for three days to make sure they were absolutely spot on – and he asked for a Cheeseburger!”

When Chris left the RAF he spent five years as the catering manager at Anglia Polytechnic University in Cambridge, overseeing staff which cooked for 2,500 people every day across four sites, before he headed for France.

“We’ll be serving classic British food with a bit of a twist, but I’ll also use what I’ve been trained in, which is classical French cuisine,” he says.

“You won’t see the standard French dishes, but a little tweak that goes with it and, of course, the French presentation, which is legendary.

“There’ll also be American-style options and completely separate menus for the evenings as well to offer something a little different.”

Chris upped and left France with his wife, Jane, and 14-year-old son Alex, who’s fluent in French so won’t have any trouble settling into his language studies at Bishop Barrington School.

He bought a house in Bishop Auckland on the internet and moved straight away to complete his spontaneous move to the North East of England.

“I’ve never been to this part of the world before, I’d never seen it, but the opportunity just appealed to me,” says Chris.

“I bought our new house on the internet without even viewing it. I’m genuinely excited about what Finley Structures are trying to do here.

“What they’re doing to preserve the history of the original building is a wonderful thing and one of the main attractions.

“What people did back at home during World War II is a story that needs to be told. Successive governments have failed to acknowledge the contribution these people made, which is a great shame, and I think this is at least an attempt to put something right there.

“The facility itself is absolutely amazing, and it’s fantastic for the area. When people see the concept of the bar lounge, the furniture and the decor, I think they’ll be genuinely surprised and very impressed.

“The pricing structure will also make us very competitive to what’s already in Newton Aycliffe and surrounding areas.”

• ROF 59 and its activity centre is due to open later this month (July).