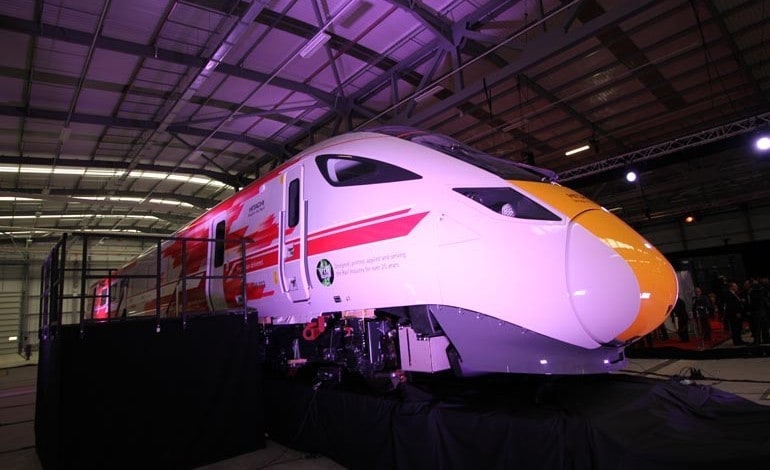 Hitachi Rail today celebrated the return of rail manufacturing to its British home in the North East, joining with key delivery partners at the official opening of a £82m Rail Vehicle Manufacturing Facility in Newton Aycliffe.

The facility is where the Government’s new InterCity Express (IEP) trains for the East Coast Main Line and Great Western Main Line, and AT200 commuter trains for Scotland, will be manufactured.

Hitachi Ltd Chairman and CEO, Hiroaki Nakanishi, welcomed the Secretary of State for Transport Patrick McLoughlin MP and Rail Minister Claire Perry MP, along with over 500 invited guests, to the opening ceremony and for guided tours of the state-of-the-art rail vehicle manufacturing facility.

Invited guests also witnessed the unveiling of the first fully fitted-out IEP train to arrive in the UK.

“This new train facility will not only provide good jobs for working people but will build the next generation of intercity trains, improving travel for commuters and families, as well as strengthening the infrastructure we need to help the UK grow.”

Chancellor of the Exchequer George Osborne said: “Today we see a major boost for the UK with Hitachi investing millions in returning train manufacturing to the North East.

“This state of the art facility will grow and secure jobs for decades to come and will help us to build the Northern Powerhouse, while at the same time revitalising one of our oldest industries in the region within which this tradition is synonymous.”

“We have brought train design and manufacturing back home to its birthplace in the North East.

“In our world-class facility we will combine the best of Japanese technology with the best of British manufacturing to make the best trains for Britain and the world.

“It is our culture as a business to take a long-term view in everything we do. From our investment here in Newton Aycliffe, to our network of new train maintenance centres across the UK, to our ongoing work in building a strong regional supply chain – Hitachi is here to stay.”

The day began with the ceremonial sealing of a time capsule by Secretary of State for Transport Patrick McLoughlin MP and Mr Higashihara, President and COO of Hitachi Ltd., featuring aerial acrobatics who first performed in April 1998 and who have performed in 57 countries around the world.

The time capsule included a small model of Hitachi’s Class 800/801 IEP train, digital photos of trains painted by local school children, a map of Newton Aycliffe, profile of site architect Masayuki Ninomiya and a mobile phone with photos and videos.

Transport Secretary Patrick McLoughlin MP said: “The state-of-the-art IEP trains that will be manufactured here will transform rail travel for countless passengers between London, the north east and south west.

“Not only will these trains allow us to operate more services, with more seats, and faster journeys, the improvements will also bring great opportunities for growth, generating hundreds of jobs in the local area and thousands across the country within the supply chain.

Following the speeches, guests watched a shadow performance depicting the story of Hitachi followed by a video showcasing the construction of the 43,000 m2 facility and sentiments from local people, before a dramatic “big reveal” of the first fitted-out IEP Train 2, which arrived into the UK especially for the ceremony.

Managing Director of Hitachi Rail Europe, Karen Boswell, said: “Newton Aycliffe will be the engine room driving Hitachi Rail’s future growth across the UK and into Europe, and I’m incredibly proud to lead a company committed to making the North East a rail manufacturing centre of excellence once again.”