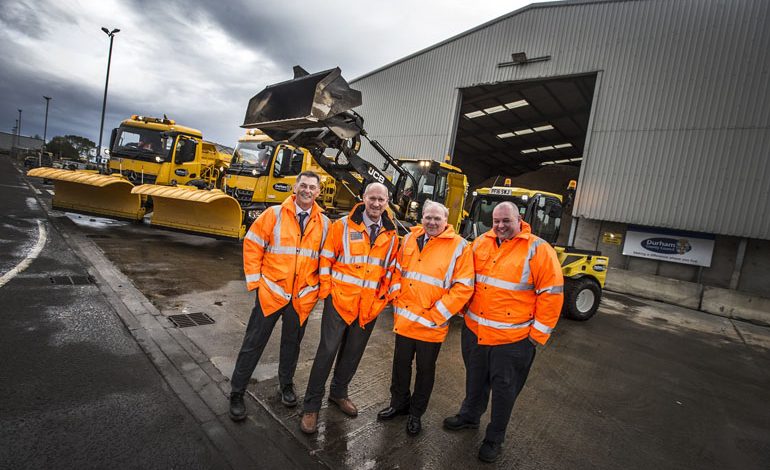 Gritters, ploughs and snow blowers are at the ready, to keep the roads and paths of County Durham clear and safe this winter.

Durham County Council has resources on standby to keep roads and paths clear of snow and ice, and as safe as can be, as temperatures drop.

Priority routes typically include all a roads, most B roads and bus routes, and other known hotspots.

During an average winter, the county’s roads will be gritted anywhere from 80 to 100 times.

Gritting all the priority routes costs £30,000 each time and can take up to two and a half hours.

The council is armed with:

• 37 gritters, 33 trailer gritters and six snow blowers, all primed and ready for action. A fleet of 50 tractors and ploughs are also available should they be needed along with hand held salt spreaders.

• 42,000 tonnes of salt ready for use and 2,500 salt bins filled in anticipation of freezing temperatures.

Cllr Brian Stephens, Cabinet member for neighbourhoods and local partnerships, said: “We have an extensive road network and parts of County Durham are prone to bad weather in the winter. Indeed the Met Office confirm that the west of the county has, on average, the highest number of snow days in England.

“This obviously creates huge challenges for us but we know how important it is that we keep our main roads as clear and as safe as is possible.

“We can assure residents that our teams will be out in the coming months, at all hours of the day and night, to ensure people’s journeys are disrupted as little as possible by snow and ice.”

Information about where and when gritting is taking place can be found at www.durham.gov.uk/article/6821/Winter-gritting-routes

Information about weather warnings can be found at www.durham.gov.uk/weatherwarnings

Further information about winter services is available at www.durham.gov.uk/winterinfo or by phoning 03000 260000.