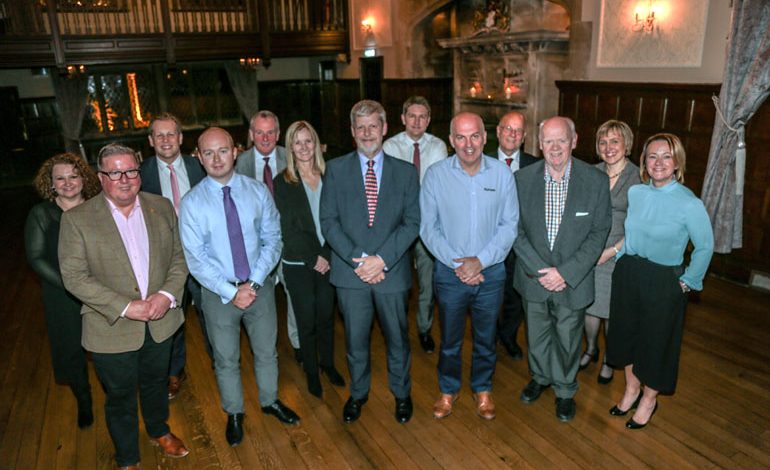 Thousands of workers were represented during a high-level meeting of business leaders from Aycliffe Business Park.

The informal dinner, organised by Aycliffe Business Park Community with help from Business Durham, was arranged to increase engagement among some of the park’s larger firms.

Combined, company bosses around the table represented a total of 3,600 people who work on Aycliffe Business Park, from an estimated 10,000.

Gestamp, which makes car chassis for a number of automotive manufacturers, employs 1,400 at its Aycliffe site.

Plant director Stuart Liddle said: “It was useful to understand more about the work of Aycliffe Business Park Community, what they’re doing for the business community and to see what they can potentially do for us.

“Our customers are very specific, so we’re not coming at this from a sales point of view, it’s more about the general health of the business park.

“People are coming to the area and seeing it as a prosperous place to do business, which helps all of us, so I think the work of this group is very important.”

Chief executive James Ritchie said: “I was a little embarrassed of the fact we’re on the business park and we don’t know enough about our neighbours.

“It’s important that we find ways to engage more locally with the supply chain. Often the solution is easier when you can speak face to face, so this was an opportunity for me to get to know more about the work this group does and what opportunities there are.

“It has never felt like that park has had a leader, so from a strategy point of view it’s good to see someone driving the bus.”

Shower manufacturer Roman employs 235 people on Aycliffe Business Park, and managing director David Osborne added: “It’s useful to get out and meet other businesses on the park.

“When you put everyone together like this, then a handful of people representing 3,600 workers around one table does give a lot of clout and a much bigger voice.”

Sarah Slaven, Business Durham’s interim managing director, said: “It’s important for us to engage with those businesses and to understand what might be useful to them.

“It’s the start of a process. I think we’ve achieved what we set out to do, which was to make the connections with some of the larger employers, but it’s very much the start of a journey.

“It’s important we keep in touch with them so they know what we’re doing, and identify opportunities for them to work with us going forward. It’s about building their confidence in what we’re doing and finding mutual benefit.”

ABPC chair Kerina Clark, managing director of the Xcel Centre, added: “Many of the small businesses on the park are already engaging with us and benefiting from the regular events we hold around the park throughout the year.

“It has been more difficult for larger companies, how they engage and why engage with us. And if we want to truly reflect Aycliffe Business Park, we need to make sure we’re hearing voices of everyone – their issues, challenges, what is it they want to see happen and what can you give to some of the smaller companies.”

Spread across 400 hectares, and with future expansion plans, Aycliffe Business Park is already home to an estimated 500 companies and 10,000 employees.

ABPC was officially set up just over a year ago to formalise the group after its predecessor had been run as an unofficial entity for more than three years.

Businesses can find out more about what’s happening on Aycliffe Business Park, register their details and submit news by going to www.aycliffebusinesspark.co.uk