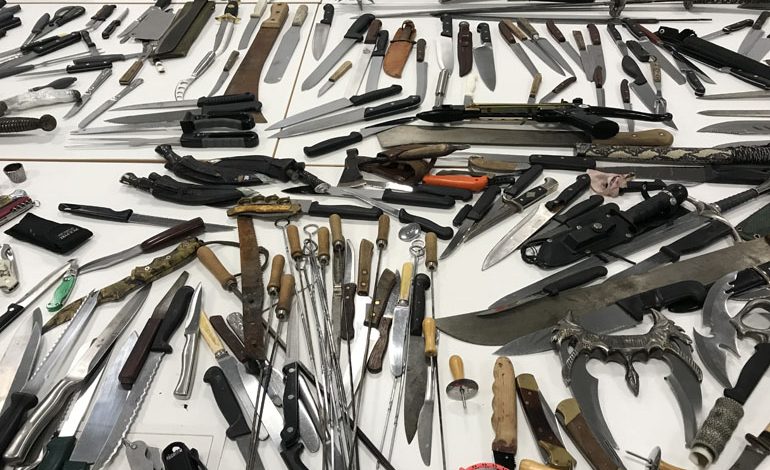 Almost 400 dangerous weapons have been taken off the streets during a week-long knife amnesty.

Knives, samurai swords, machetes, an axe, crossbows and even a mace were handed in at police stations across County Durham and Darlington during last week’s Operation Brassen amnesty.

Collection bins were set up in 11 stations across Durham Constabulary force area where members of the public could anonymously drop off bladed articles.

Officers hoped the amnesty would provide the chance to take potentially deadly weapons out of circulation and raise awareness of the potential harm caused by knife crime.

Detective Chief Inspector Paul Gray, from Durham Constabulary, said: “I would like to thank everyone for supporting our knife amnesty Operation Brassen, which was held in support of the national Operation Sceptre knife crime awareness campaign.

“During the week, we have received almost 400 weapons which people have kindly handed in.

“I want to reiterate that County Durham and Darlington is a really safe place to live, but with the support of those members of the public who have handed in these knives, this operation has made it even safer.”

Some of the more unusual weapons which were surrendered included two crossbows, a First World War American army trench knife with knuckleduster, along with what appears to be an ornamental mace.

All of them will be safely disposed of over the next few days.

During the week of the amnesty, an awareness and education campaign with the Crime Prevention and Cohesion Unit has been running in schools and on social media highlighting the devastating impact which carrying knives can have, and educating people in the law around knives and the harm they can cause.

Inspector Rachel Stockdale said: “I would like to thank everyone who has taken part – there has been co-ordinated work in terms of action, education in schools and work with our partners to get as many knives and weapons off the streets.

“Some of the knives which have been surrendered aren’t typical of those officers would see day-to-day, but the amnesty has made sure those weapons don’t fall into the wrong hands and we can continue to keep the people of County Durham and Darlington safe.”