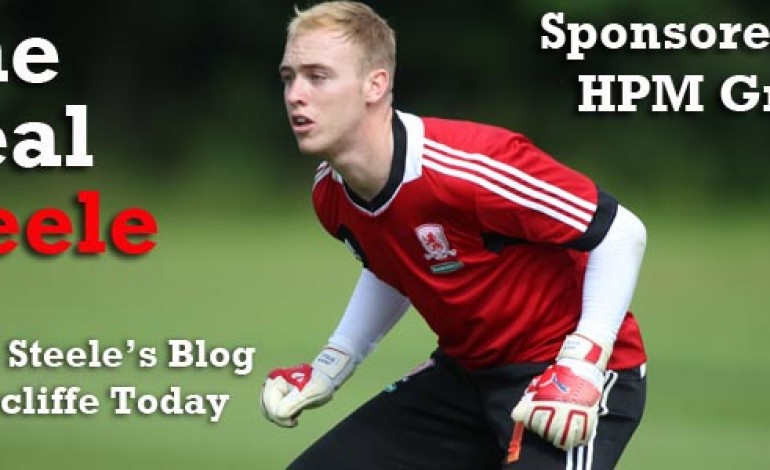 I enjoyed the fantastic honour of training with the England senior team last week and I can’t tell you how proud I was.

I was training with England Under-21 ahead of our game with Sweden when the goalkeeper coach Dave Watson told me to join the seniors, after Joe Hart’s injury playing for City on the Sunday.

Naturally, I was delighted. They made me feel very welcome and I thoroughly enjoyed it.

I’d love to taste more of it, of course, but if I’m never called up for the England senior squad again I’ll always look back on it as a proud moment.

It was even more pleasing to get a win for Boro on Tuesday night, beating Leeds 1-0 at the Riverside, in what was our first league victory since December.

Losing five games on the spin was hard to take. We didn’t deserve some of them. Against Barnsley there were two deflected goals and they won it.

But you can’t go around feeling sorry for yourselves. Sometimes it’s hard luck which makes you pull together and we did that, and we had to grind out a result against Leeds.

It wasn’t the most fluent footballing performance, it was a battle, but that’s the nature of what Leeds bring and we dealt with them really well.

It sets us up with a six-pointer at Crystal Palace on Saturday and it’s another huge game for us.

For all the doubters who were saying we’d blown our chances, a win will take us above Palace – a team who were beating everyone not that long ago – and could potentially put us joint-third.

Football is an emotive sport which generates lots of passionate opinion, but you also need to remember how tight the Championship is and that anyone can beat anyone.

The main thing from our point of view is that the confidence remains as strong as ever in the Boro dressing room, buoyed of course by Tuesday’s result, and hopefully we can build on that.

Our trip to London will unfortunately mean I won’t be able to watch the biggest game being staged in the North-East this weekend – at Spennymoor!

They take on Darlington 1883 in the Northern League on Friday night, when a sell-out crowd of 2,400 is expected, and it promises to be a cracking game. Everyone is talking about.

One of my best friends, Chris Mason, plays for Spennymoor so my loyalty is with him, but Darlo’s a good club being run by two top football men in Martin Gray and Brian Atkinson.

They’re currently top of the first division and, even though Spennymoor have games in hand, they’ll find it tough playing all those games towards the end of the season, when Darlo will have points in the bag.

My Sunday team, Newton Aycliffe Working Men’s Club, were somewhat controversially knocked out of the last 16 of the Durham County Cup by our arch rivals Witton Park recently.

They scored late in extra-time at 1-1 and we hit the post twice before the end, so that was hard to bare.

Mind, we play them again in the semi-finals of the Heart Foundation Cup soon, which will give us a good chance to seek our revenge, so we look forward to that one.

Catch you next time.