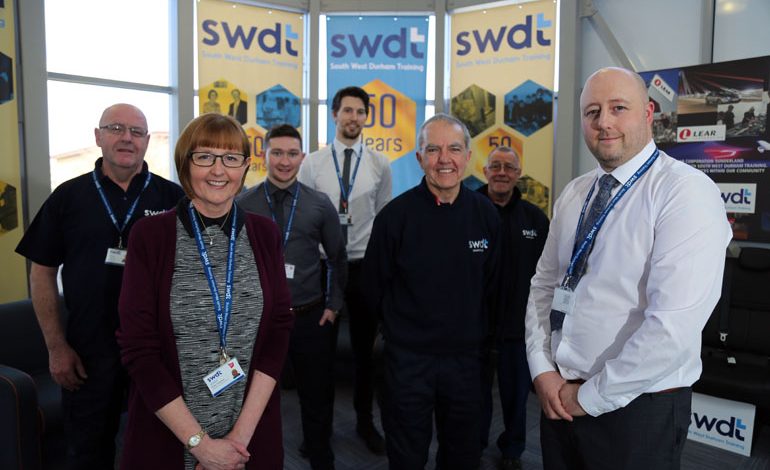 One of the region’s oldest training providers is gearing up for growth after expanding its team with five new recruits.

South West Durham Training (SWDT) celebrated its 50th anniversary towards the end of 2017 with a high-profile event headed up by BBC Breakfast presenter Steph McGovern.

The Newton Aycliffe-based organisation says the major landmark has given it new momentum, with a surge of new enquiries coming in.

And SWDT has now taken on five key new members of staff as the firm also prepares to launch a series of new Higher National Diploma (HND) courses for employers later this year.

Vicky Chapman has been taken on as the training centre’s new supervisor, while workshop technician Peter Johnson joins estates technician Dave Wheatley through the door.

General manager Jason Howe says all five new appointments have put the organisation in a much stronger position going forward.

“We’re on the crest of a wave after the 50th anniversary celebrations at the end of last year,” said Jason.

“We enjoyed a lot of positive local coverage and PR from the event which seems to have had a really positive impact, in terms of enquiries and the general feel-good factor around the place.

“Now we’re looking to kick on with these new appointments as we look to strengthen our offering to employers while we also prepare for the HND courses.”

That’s as well as its full-time apprenticeship provision which covers mechanical and electrical engineering, toolmaking, fabrication and welding, manufacturing, plumbing and gas, polymer production and manufacturing and engineering technical support.

The provision of HNDs has been on the pipeline for a couple of years, and Jason added: “We’ve adapted and grown our training provision carefully over the last two years to ensure we’ve maintained the quality levels of our existing training courses.

“We’re now geared up for the HND courses and it will be another very valuable training offering for our existing and new clients.”

A subsidiary of Bishop Auckland College which employs more than 25 staff, SWDT works with many of the region’s big employers including Hitachi Rail, Cummins in Darlington, Richmond-based Pipeline Engineering, GlaxoSmithKline (GSK) in Barnard Castle and car parts maker Nifco in Stockton, and currently has more than 300 learners on its books.