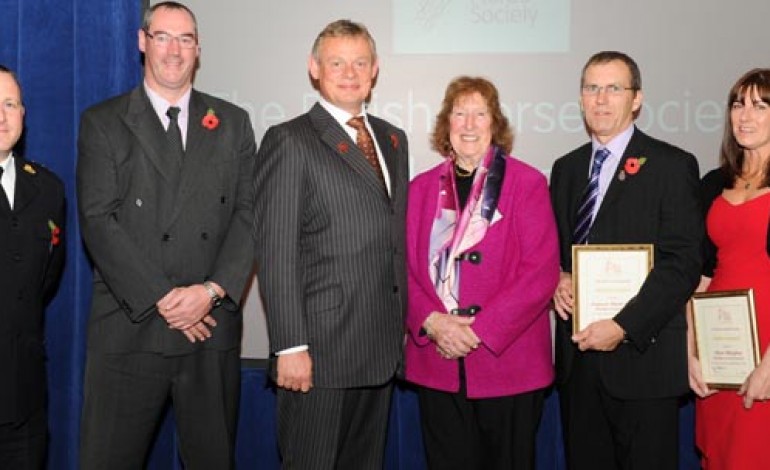 An initiative to tackle stray horses in part of County Durham is rounding up a feast of rewards.

The initiative has not only improved road safety and horse welfare, it has also led to the team responsible being nominated for two national awards.

The operation was a joint Durham Constabulary and Durham County Council response to the horse problem in parts of the county, particularly Bishop Auckland, working with the RSPCA and the British Horse Society (BHS).

The success of the operation led to the chairman of the BHS, actor Martin Clunes, presenting a welfare award to those responsible at a special ceremony in London.

Inspector Martin Peace, who heads the local neighbourhood team, said: “The award was in particular recognition of how we relieved the suffering of horses in the area, by impounding them, rehoming them, providing secure grazing and educating owners about horse welfare.

“This was very much a team effort involving the county council and other agencies, who all worked very hard to find a lasting solution to a long-standing problem.

The problem was tackled in a number of ways:

• A total of 66 horses, some roaming loose on local roads, others being grazed illegally in places like public parks and children’s play areas, were rounded up and re-homed with responsible owners.

• Officers worked with local horse owners, many of them from the travelling community, to educate them about keeping their animals in secure and legitimate areas.

• The team identified pockets of council-owned land which was not being used for anything in particular and arranged for it to be fenced in as suitable grazing land. Members of the travelling community have placed horses there and a process of arranging grazing contracts has now started. This will in turn generate a profit for council tax payers.

• Police officers have been trained in horse handling techniques by local British Horse Society (BHS) representatives, at no cost to the taxpayer.

• ‘Green zones’ – council-owned land where loose horses can be placed temporarily – have been identified.

“We’ve sustained an average reduction in horse related nuisance across the county of 40% for the last two years. Horse-related road crashes In Bishop Auckland have gone from 14 a year to one, and the total estimated cost savings to services and the public is estimated at nearly £269,000.

“Not only is this good news for local residents, it’s also good news for the horses, many of whom were in a poor condition with no quality of life.”

Next month the team will find out if they have been successful in the annual national Tilley Awards. They were nominated in the public vote section and even if they do not win, they will still receive a certificate of merit.