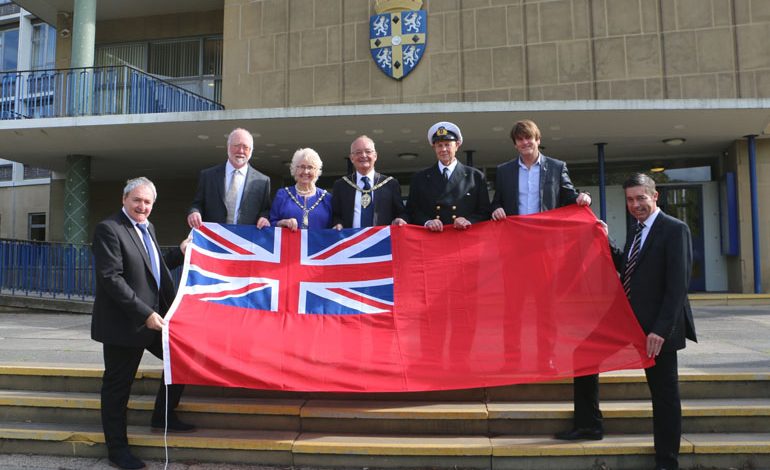 Representatives from the local merchant marine industry joined the authority’s Chairman, Cllr Bill Kellett, to present him with the Red Ensign, which will be flown over County Hall.

The Red Ensign has been the flag of the British Merchant Navy since 1854.

For the past 17 years, 3 September has been designated as Merchant Navy Day, honouring the men and women who have worked in the industry to keep our country supplied with food, fuel and imports and to support international commerce.

County Durham has a long association with the merchant navy, with its own port at Seaham Harbour established in 1828 to transport goods and coal. The port was extended at the beginning of the last century and was an important facility through two world wars.

In the 1990s, when the last coal mines closed in East Durham, the council worked with Seaham Harbour Dock Company to relocate its warehousing to secure the long term future of the port.

The north dock has now been redeveloped as Seaham Marina as part of the wider regeneration of the town.

Cllr Kellett said: “The merchant navy has played a vital role in the development of our county and country over many years and we are delighted to fly the Red Ensign to mark Merchant Navy Day.”

Tom is also secretary of the Seaham Seafarers Centre, trustee of the German Seafarers Mission in Middlesbrough and a member of the Merchant Navy Welfare Board, while Christopher has been a pilot at Seaham Harbour for more than 40 years.

They were joined by Peter Coe, Durham County Council’s development manager. Peter has been involved in the regeneration of the dock and harbour facilities.

Tom said: “People working at sea work sacrifice a great deal and often display enormous courage and I am pleased that the council is recognising the contribution seafarers have made and continue to make to this day.”