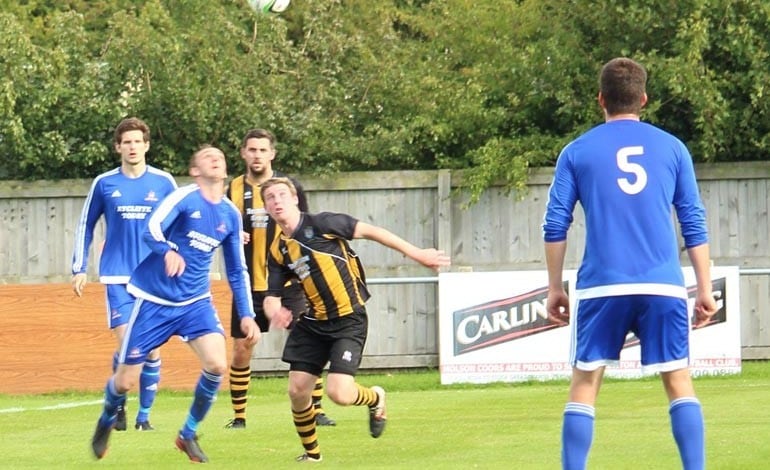 Newton Aycliffe reached the First Qualifying round of the FA Cup for the first time in their history thanks to two goals from Matty Moffat.

A goal in each half from the prolific striker gave Aycliffe a 2-0 win over Morpeth and a trip to Brighouse Town in the next round.

Aycliffe’s first goal came after 15 minutes, Moffat beating the centre half to a header, then running on to the loose ball & firing past the Morpeth keeper, Karl Dryden. Early in the second half Morpeth’s Jordan Fry had the ball in the net but the goal was ruled out.

Within a few minutes Moffat had his and Aycliffe’s second with another good finish giving the keeper no chance.

Although Morpeth pressed to get back on terms the Aycliffe defence stood firm with Grant Hickman and Alex Kitchen outstanding in the centre.

Moffat came close to his hat-trick with a long run late in the game but his shot was blocked by the keeper.

This was an excellent performance against a strong Morpeth side and a sign of the improvement Peter Dixon has brought to the club this year.

Aycliffe have never before progressed beyond the two preliminary rounds of the FA Cup.

The best previous result was taking Spennymoor to a replay in the Preliminary Round.

Aycliffe now have two away games in the league, against Bishop Auckland and Jarrow Roofing, before a return home on Tuesday 8th September against Consett, which will be only their third game at Moore Lane so far this season.

Aycliffe will then play their next FA Cup match with the trip to Brighouse Town on Saturday 12th September.