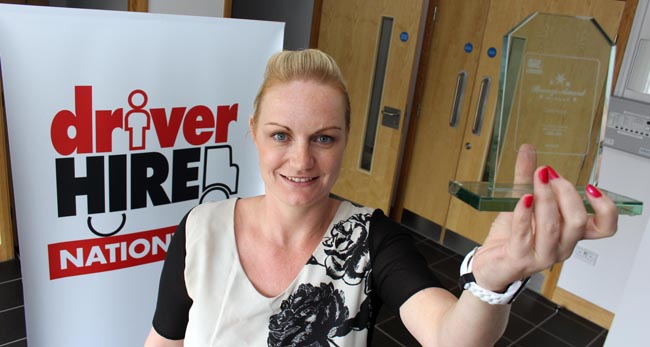 Newton Aycliffe-based Driver Hire has won a national award for hitting more than £300,000 in turnover.

Driver Hire Darlington, a franchise of the national network based on Aycliffe Business Park, has won the firm’s prestigious Bronze Achievement Award for outstanding sales performance.

The UK’s largest specialist supplier, Driver Hire provides temporary and permanent drivers and other logistics staff to local and national organisations in both the public and private sector.

If they’re short of staff – through illness, holidays or seasonal demand – Driver Hire will supply them with a suitable replacement.

Driver Hire Darlington, based in Carlton House at the HUB Workspace on the park, now has more than 100 drivers on the books and supplies them to around 30 clients in the DL area.

“I’m absolutely delighted to win this award, which is recognition for a lot of hard work and dedication that has gone into the business,” said Lisa, who’d previously managed a number of distribution centres before setting up her own business.

“Having worked in the industry for a lot of years and after sharing the frustrations of local firms growing increasingly frustrated with the poor service offered by other organisations, I felt I could do a better job and offer a really top service.”

Driver Hire’s national chief executive Chris Chidley said: “This is a performance to be proud of, achieved in challenging economic conditions.

“Lisa and all the team at Driver Hire Darlington are to be congratulated on their success. It’s a result of their hard work, endeavour and the first rate, round the clock service they and their drivers deliver.”

Meanwhile, Driver Hire has been fast-tracking drivers through the new Certificate of Professional Competence (CPC) exams, which came into force this month, and have been getting on average 150 through it every month.

Lisa added: “We’re already experiencing an increasing number of drivers coming through the door to get the CPC under their belts, but September is the cut-off point and we estimate that there are thousands of drivers yet to take the training in the UK, and hundreds in the North-East alone.

Driver Hire Darlington is currently training drivers from a number of nearby transport companies as well as independent operators, with their fast-track course costing £300.