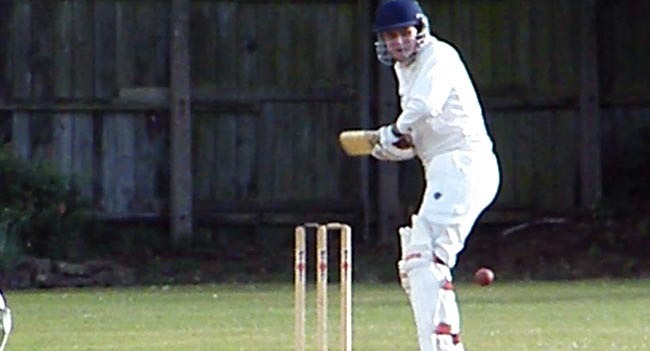 Newton Aycliffe’s cricket team are still flying high at the top of their league after chalking up a ninth straight win at the weekend.

The club’s first team romped to a six-wicket victory at home to Norton’s second XI at Aycliffe Sports Club on Saturday to maintain their lead at the summit of the NYSD League third division.

In glorious conditions, Aycliffe won the toss and elected to bowl, with Norton managing just 141 all out from 41.3 overs.

It took Aycliffe 30.4 overs to reach the winning target, with Adam Gittins (pictured above) smashing 71 to get the man-of-the-match award, while Sean Morgan was 33 not out.

The victory puts Aycliffe on 284 points and in poll position to win promotion at the first attempt in their debut NYSD League campaign.

Secretary Lee Weldon said: “It was a terrific run in our first 15/15 campaign, coming to an end against a very strong Middlesbrough team containing a number of players with Premier league experience.

“We can be very proud to have progressed this far in our first season in this league cup.”

Aycliffe’s second XI lost at home to Saltburn’s third team in the NYSD Sunday League second division at the weekend.

But in a close finale, Saltburn scored 125 from 31.3 overs with just one wicket to spare, with Dan Weldon taking three for 28, Pat Howe two for 22, Andrew Jennings two for 23 and Ross Dixon two for 34.

Man-of-the-match was captain Tom Wickins after he dominated a record ninth-wicket partnership of 46 with Andrew Jennings (14 runs), which helped give a Aycliffe a total worth defending.

Lee Weldon added: “Our young side came so close to winning this game against title hopefuls Saltburn and were desperately unlucky to lose by the closest possible margin of one wicket.”

Aycliffe’s first team continue their promotion bandwagon at Saltburn on Saturday, taking on their second XI (1.30pm), while our second team are at Wolviston’s third XI this Sunday (2.15pm).