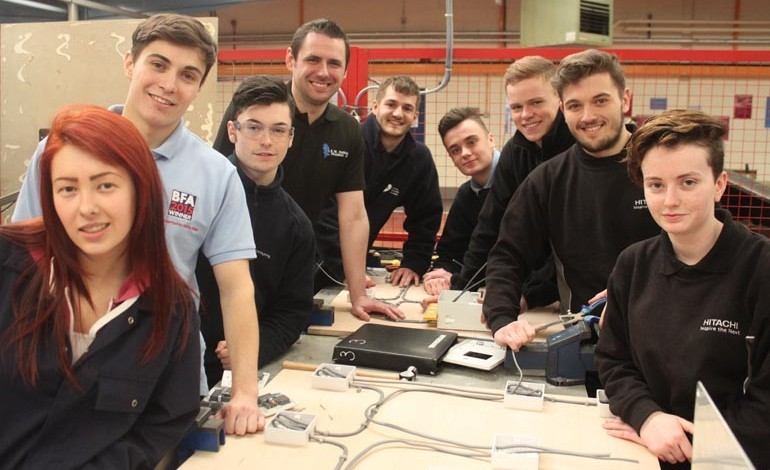 A Newton Aycliffe training provider which has launched the careers of a number of industry leaders has thrown its weight behind National Apprenticeship Week.

Other well known alumni include comedian Vic Reeves, who did a mechanical engineering apprenticeship at South West Durham Training in the mid-1970s before swapping the shop floor for the stage.

SWDT’s chief executive Lee Childs was even himself an apprentice at the Newton Aycliffe engineering training centre when working at Black & Decker in Spennymoor after leaving school.

Lee, who marked National Apprenticeship Week by spending a day working alongside his apprentices, says his own career and that of many other former SWDT apprentices is proof that that this week’s theme ‘an apprenticeship can take you anywhere’ is no exaggeration.

This year there is a particular focus on higher skills to show how young people, entrepreneurs and businesses can ‘rise to the top’ through traineeships and apprenticeships.

Lee, who will be working tomorrow with apprentices to build and test electrical power and control circuits, said: “We have a long list of former apprentices here at South West Durham Training who have indeed risen to the top to become industry leaders.

“Apprenticeships are now officially recognised as being a career path equal to degrees, and, among many others, we are currently training young engineers working for Hitachi’s rail manufacturing facility and skilled apprentices for international manufacturer 3M – both based here in Newton Aycliffe.

“With the Government committed to create three million apprenticeships by 2020 and the emerging skills gap in engineering in the North-East, there are lots of exciting opportunities for young people with the determination to succeed to take the first steps into long and rewarding careers.”

In 2014 South West Durham Training received an ‘Outstanding’ Ofsted report, receiving the top grade in all four categories: overall effectiveness; outcomes for learners; quality of teaching, learning and assessment; and effectiveness of leadership and management.

The training provider, which is about to enter its 50th year, is a subsidiary of Bishop Auckland College which trades under its own brand as a separate registered charity.