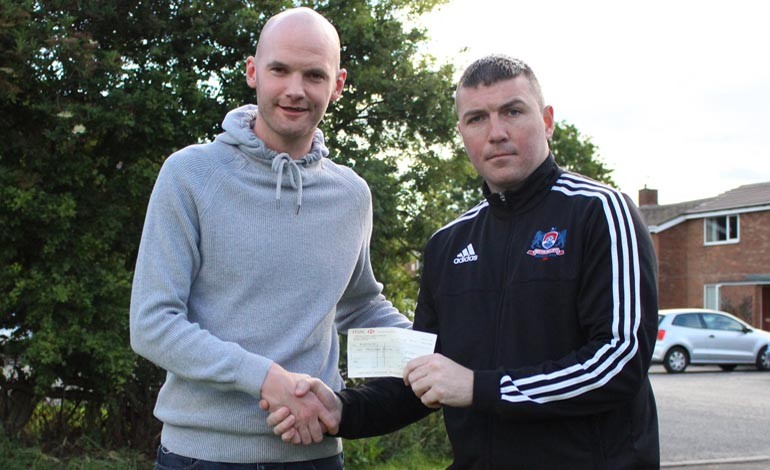 A fundraising Leukaemia survivor received a welcome boost to his appeal this week as Newton Aycliffe FC captain Mark Stephenson presented him with a cheque for £1,000 on behalf of the club and outgoing Northern League Chairman Mike Amos.

Paul McGeary, 34, had previously raised just under £20,000 for the charity Bloodwise, having been diagnosed with Acute Promyelocytic Leukaemia in November 2014, with this most recent donation taking efforts to a staggering £20,876.53.

McGeary – a former committee member for the Northern League club – has been in remission for over a year, but remains dedicated to raising more money and awareness for the charity following a short break.

“We raised a phenomenal amount in the first 12 months, thanks to the efforts of family, friends, work colleagues and even total strangers,” said McGeary.

“There were people doing assault courses, hosting coffee mornings, themed nights, running triathlons, pool competitions, you name it; people united and helped us reach £13,000 in no time at all.

“A grand black-tie ball took us close to the £20,000 milestone in October last year but things slowed down somewhat and this year myself and my wife have shifted our focus to raising funds for a family friend who has a severely ill young child.

“The football club have remained loyal to both myself and the cause, holding bucket collections and allowing us to host a charity reunion match on the Moore Lane Park pitch, and I thank everyone involved for nominating Bloodwise as their chosen charity, and helping kickstart the fundraising drive again.

“Myself and a close friend – who has also affected by cancer recently – are now looking to organise another grand function in the autumn to hopefully help us pass the £25,000 mark before the year is out.

Newton Aycliffe Secretary Stephen Cunliffe added: “When the club was chosen to receive one of the donations from Mike Amos to forward on to charity, Bloodwise was the unanimous choice, and we are only too happy to help Paul raise both funds and awareness.

“It is great to see him back to his former self, enjoying life again and we look forward to welcoming him back to the club this year after his year off,” Cunliffe joked.

Newton Aycliffe begin their Northern League campaign at home to West Allotment Celtic on Tuesday 9th August, but first travel to Washington in the preliminary round of the FA Cup on Saturday 6th August.

The club are still looking for help from corporate sponsors right through to matchday volunteers and all expressions of interest are welcome to contact Steve Cunliffe on 07872 985501.