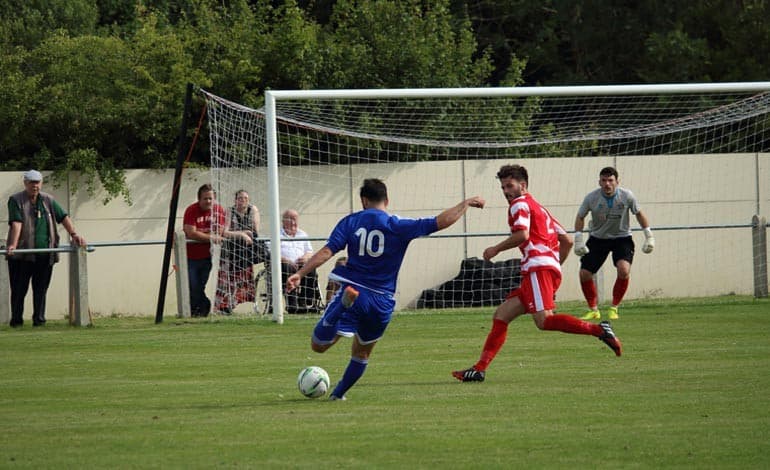 Newton Aycliffe FC’s season got off to a fantastic start with a win over league champions Marske United.

A crowd of 175 turned out on a lovely summer day to see the home team put on an impressive performance at Moore Lane.

For Marske this was their first defeat on the opening day of the season since 2009.

The first half was goalless although both sides had chances. Aycliffe’s big new signing, Matty Moffat, had the ball in the net after just six minutes but an offside flag ruled the goal out.

Aycliffe took the lead on 53 minutes following a Dennis Knight corner. With another debutant, Alex Kitchen, challenging Marske keeper Robert Dean had the misfortune to punch the ball into his own goal. A defender made a desperate attempt to clear but the assistant referee signalled that the ball had crossed the line.

Just after the hour it was 2-0 thanks to a scorcher from Dennis Knight. Moffat back-heeled the ball to last season’s top scorer who fired home from 20 yards (pictured above).

The champions fought back with a goal on 69 minutes, with O’Sullivan turning in a cross from six yards.

Marske pressed on for an equaliser and came close in the dying minutes when a Chris Gott free-kick was saved by Aycliffe keeper James Winter, who was able to collect the rebound in the scramble that followed.

This was an excellent result for Aycliffe which saw many outstanding performances but none more so than Brian Close. The former Middlesbrough player’s assured passing ability in midfield played an important role in setting up the victory.

Aycliffe now move on to West Allotment Celtic on Wednesday night before a trip to Lancashire this week, where they meet Nelson in the Emirates FA Cup.