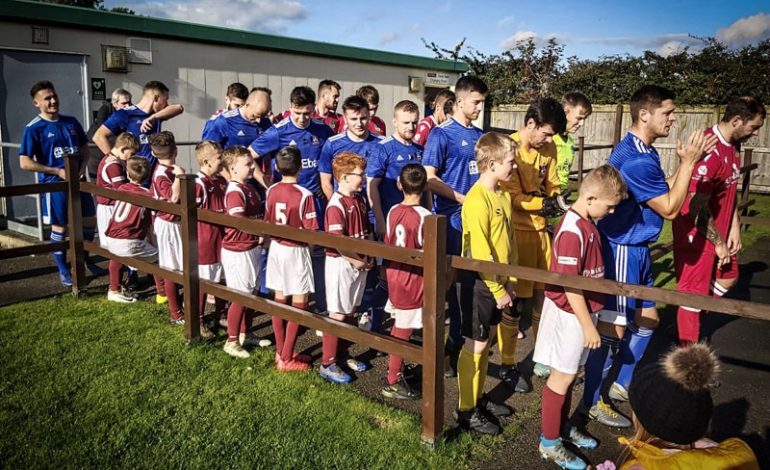 With the weather being a bit more forgiving this weekend there were several more of our junior teams in action compared to recent weeks.

Under 7 Blacks played away against Hartlepool Youth although the boys didn’t get the result they wanted, the effort they put into the game was not justified. The boys are improving each game and showing great determination. Jacob walked away with MOTM.

Under 7 Whites played against Washington and came away with a great result. An excellent performance and effort from all the boys with goals from Regan and Harry. MOTM went to Will W for his outstanding tackles.

Under 8 Whites played their final summer league game against a strong Hebburn team at Farringdon. The team put real effort and determination into the game and came away with the result they deserved. MOTM went to Jack R for his two fantastic free kicks. The boys have put their all into this summer league which has resulted in them being promoted up to the higher level leagues.

Under 8 Juniors were away against a strong Seaton Carew. The juniors started very strong and took the lead into the second half however Seaton managed to grab back a couple of early goals and unfortunately the boys lost momentum. Goals in this game came from Jack and Jonah, MOTM went to Dom for some fantastic saves and great play when he came out of goal.

Under 8 Blacks played their last game of the summer season. Charlie grabbed a goal for the team, but it wasn’t to be their day. Although the result did not go how the team would have liked it’s been a positive first ever league campaign for the juniors. They are learning and progressing well. MOTM went to James for his improvement shown through the first season campaign.

Under 9’s were at home this weekend to Stranton and came away with an absolutely brilliant result. After twice coming from behind they produced a brilliant display to finish the game on top. Two great goals from Tyler and a crisp finish from Archie. MOTM went to Tyler.

Under 10’s remained unbeaten this season with a well-earned draw against Stockton Yellows. It was a tight game however Thomas provided an equalizer with a brilliant individual piece of skill and a great finish. MOTM went to Preston of his all-round performance with his ability to play in different positions

Under 11 Blacks came away with the spoils this weekend although it was a scrappy performance, an enjoyable game none the less. Goals from Keaton, Alex and Leon. Leon also grabbed the MOTM for this game.

Our U11’s then went straight to Moore Lane Park as mascots for Newton Aycliffe FC in their home fixture v Penrith FC. A great time was had by all (pictured above).

Under 11 Whites travelled to Billingham this weekend for an early kick off. Having already played this strong Billingham team to which they lost heavily, the boys were keen to show everyone a better performance can be produced, which they did. They created loads of chances and hit wood work however Billingham were strong. MOTM went to Danny the goal keeper for a much improved performance. The opposite team coaches even approached our players and praised them on their improved performance and attitude.

Under 11 Clarets were at home to Hartlepool Youth, a team who had got the better of them twice last season. Conditions were tough but a fantastic spirited performance saw Aycliffe put a lot of pressure on the visiting side and come away with the result they well deserved. Alex, Ashton, Kia and Danny were on the score sheet with a gritty performance. MOTM was awarded to Harry by the referee.

Under 12 Whites travelled to Billingham Synthonia. Once again the boys produced a impressive and strong performance with an abundance of goals. Goals came from Niall 7, Tyler 3, Jack and Dom. MOTM was Niall.

Under 12 Blacks played away to Byers Green. The team started well and by half time they were well ahead with a first half hat trick from Jake. Byers came out strong at the start of the second half grabbing a couple of goals back however the boys carried on from the first half performance and added a few more goals to their lead. Goals from Jake, Kenzie and Rhys. The MOTM went to Kenzie for his first hat trick.

Under 13’s this weekend travelled to Redcar Town and came out worthy winners with a 6-3 win. Although the boys again found themselves 3-1 down. They quickly composed themselves and began the fight back with some great football with all goals coming from Jake, Zak, Thomas A, Will and Edison but unfortunately the game was slightly soured when Edison was carried off injured after an awful tackle. Again the team and parents were complemented for the behaviour by the referee.

Under 15’s were at home against Fishburn Park and came away with a great 7-0 win. Goals from Leon, Lewis, Brandon and Dylan. MOTM went to Leon for his great goals and all round performance.

Let’s hope the weather holds up again for this weekend with lots of games being played at Woodham Academy on both Saturday morning and Sunday.