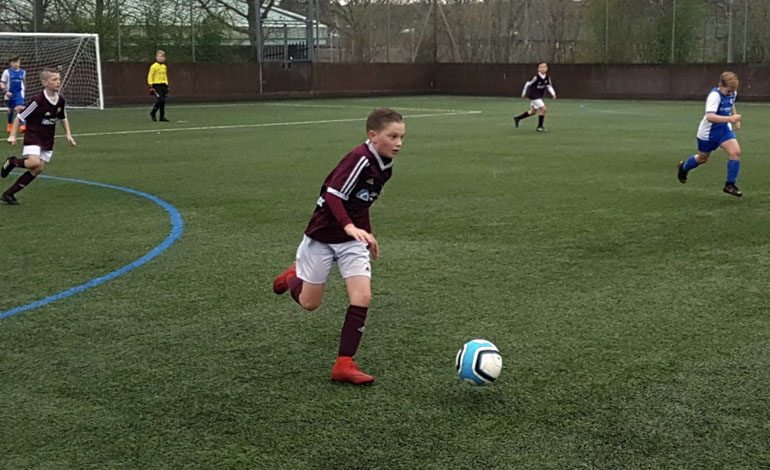 The Aycliffe Juniors teams continued their football seasons with a variety of games this week. There were many league matches and a Challenge Cup semi final to enjoy.

The Under 8’s were playing at home against Leven and a determined effort was not enough to challenge great opposition. The Aycliffe team worked hard but slipped to defeat.

The Under 9’s ‘Clarets’ faced Escomb Tigers they started slowly and found themselves 2-0 down at the break. Jude scored a second half goal but this wasn’t enough as the game ended in a 2-1 loss. Harry was named as the man of the match.

The Under 9’s ‘Whites’ played a re arranged game against Durham United on Friday. A consolation goal from Ethan was all that could be taken from a 5-1 loss where Roman was the man of the match. They then played Hepworth FC Pumas on Saturday, dominating from the start with two goals from Ethan earning them a 2-1 win. Daniel’s excellent work rate and support play saw him gain the man of the match award.

The two Under 9’s teams also came together for a TJFA League game against Greatham FC ‘Blue’ on Sunday. A free flowing game started evenly, with both teams having chances. Man of the match Harry scored with a shot from outside the box to give Aycliffe the lead. Greatham though equalised and the game ended 1-1 with all the players putting in a good display.

The Under 10’s ‘White’ had their League Challenge Cup semi final against North Riding Division 1 side Boro Rangers ‘White’. It was a tight game but the visiting team came out 2-1 winners to end Aycliffe’s cup run.

The Under 11’s faced Billingham United Hornets in a repeat of last weeks game. A solid first half performance led to the game being goalless at the break. Billingham though went on to score three quick goals early in the second half before Charlie E scored and then Alfie hit a wonder goal to get Aycliffe back in the game at 3-2. As they searched for the equaliser a fourth goal was conceded and game ended 4-2.

The Under 12’s Russell Foster League team were up against Washington AFC Lions but lost out 5-1.

The Under 12’s TJFA League team played two midweek games, the first at Golden Flatts and then at Marton ‘Whites’. A well contested match at Golden Flatts saw Jake P score first before the hosts equalised. In the second half Lucas and Evan scored to open up a 3-1 lead but is was a tight finish after Golden Flatts got one back. The game finished with Aycliffe gaining a 3-2 win. At Marton the Aycliffe team ended the game with only eight fit players and slipped to a 4-1 defeat with Lucas on target for Aycliffe.

The Under 13’s hosted New Marske FC and their good form continued with a 2-0 win. They will look to keep up their positive efforts in to the last two games of their season, both of which take place in the next week.

The Under 16’s played Darlington RA Locomotives in midweek and then Billingham Synthonia on Sunday. At Darlington they won 4-0 then at Billingham they carried on their winning ways and worked hard to earn a 2-1 victory. The lads have another busy week ahead with two more games scheduled.

The Under 23’s played Whitley Bay Sporting Club. Sam Dawson played well in the unfamiliar position of striker and Brad Blythe added good impact off the bench in a 1-1 draw.