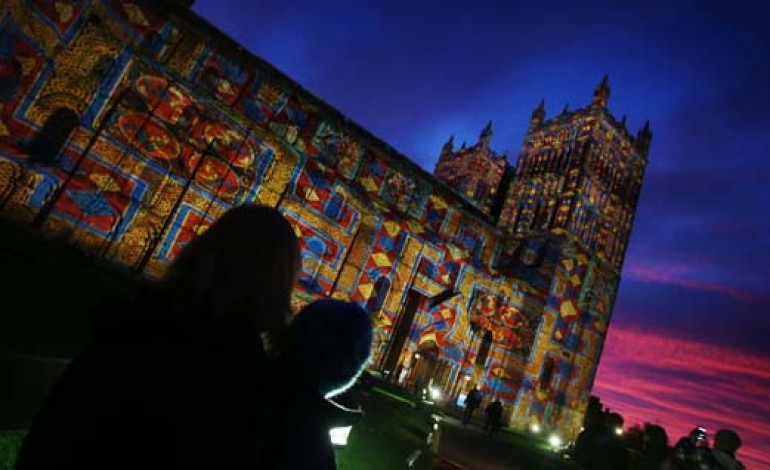 Organisers of Lumiere Durham say 175,000 people attended this year’s event at the weekend.

Durham’s popular light festival – now in its third year – came to a close on Sunday (November 17) at 11pm.

The festival, produced by leading creative company Artichoke and commissioned by Durham County Council, is supported by Arts Council England and a raft of sponsors and funding bodies.

Artichoke says that early estimates indicate that 175,000 people attended the festival over four nights, and the city’s restaurants and hotels were full to bursting over the weekend. The event passed off safely and without incident.

This year, to spread the crowds, the festival had extended opening times and a free ticketed system during peak hours in the central area for the first time.

Visitors from all over the world flocked to the festival to see the 27 light sculptures and installations, while the longer opening times enabled people to choose the most appropriate time to visit the festival.

Elephantastic, a larger-than-life 3D elephant marching through a specially-constructed arch on Elvet Bridge was a clear festival favourite.

On North Road, crowds applauded at the end of each cycle of the Keyframes mini-drama, which saw LED stickmen taking over the former Durham Miners’ Hall, to the strains of Lee Dorsey’s “Working in a coalmine” recorded by young people from Durham County Wind Band. 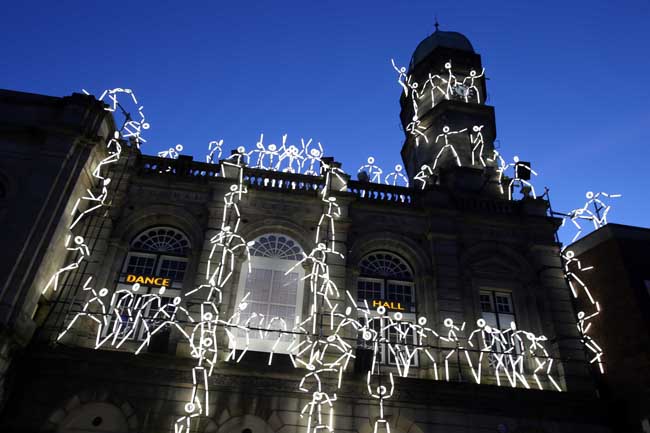 A marriage proposal was made at Solar Equation, Rafael Lozano-Hemmer’s shimmering animated replica of the sun, which features the world’s largest custom-made spherical helium balloon. Nearby, visitors queued at the scanning booth to scan their own eyes and see the images added to Gina Czarnecki’s artwork, which was beamed onto the façade of the Bill Bryson library.

The sound of birdsong by night drew audiences into St Oswald’s Churchyard to explore Sarah Blood’s illuminated birdhouses that filled hidden pockets with light and sound.

Crown of Light (main pic, top of page), Ross Ashton’s glorious historical son et lumiere attracted record numbers, as did Atsara’s quietly mesmerizing installation and soundscape inside and in the gardens behind.

Around 200 people attended the Durham University public science event about the eye in art and science. Artist Gina Czarnecki together with some of the University’s leading academics presented a series of talks which explained in simple terms how the human eye works, its evolution and impact on perception, and the way artists and scientists had worked together on the project.

As part of its outreach to the wider community, Lumiere worked with offenders in Durham’s three prisons and a youth remand centre. Over 100 prisoners and their families created artworks, which were displayed together to form a huge illuminated wall in the Galilee Chapel inside Durham Cathedral. The artworks will be returned to be exhibited inside the institutions, following Lumiere.

Helen Marriage, Lumiere’s Artistic Director said: “We are delighted with the success of this third edition of Lumiere. It’s been wonderful to how much everyone has enjoyed it this year. The feedback has been overwhelmingly positive. “We made many improvements to the way the festival has been organised this year, to ensure visitors had an unforgettable experience that was comfortable as well as enjoyable.

“Once again, Artichoke would like to say a huge thank you to the visionary Durham County Council, and its wonderfully innovative approach to cultural tourism.”

Cllr Simon Henig, Leader of Durham County Council, said: “Lumiere 2013 has been breathtaking, thought provoking, entertaining and an overwhelming success for tens of thousands of festival-goers and very many businesses.”

Full details of the programme for Lumiere Durham can be found on the Lumiere festival website, www.lumiere-festival.com 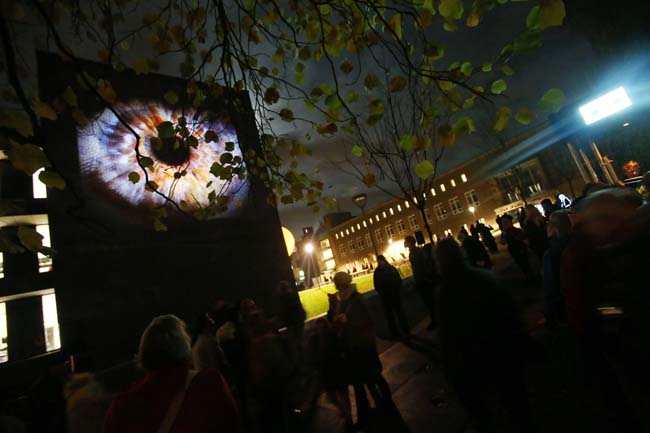